Paradise Cheesecakes was founded in January 2000 by Ann and Mike Calamis.

Paradise Cheesecakes was founded in January 2000 by Ann and Mike Calamis. In earlier years, Mike began making cheesecakes for friends and family for parties and

special occasions. From an old family recipe, he expanded on a plain cheesecake with blueberry topping. With the overwhelming responses from this incredible, yet simple cheesecake, he believed there was something worth pursuing. When he began receiving suggestions for different flavors, he started experimenting and before long six new cheesecake flavors were perfected. Everyone that tasted them told him “They are the best cheesecakes they ever had” and suggested starting a business, however Mike wasn’t able to do it alone.

In November of 1997, Mike met Ann at a local skating rink where she was teaching roller-skating and soon they were married. Since Ann had many years of culinary experience they discussed starting a business. After creating a formal business plan they applied for a business loan. In January 2000 Paradise Cheesecakes was born and started out as a small wholesale operation in a warehouse. Thanks to Ann’s intense creativity, they continued to add many new flavors and items to their wholesale product line for the next five years. The wholesale business rapidly grew with support from local chefs, area restaurants, hotels and country clubs.

With the overwhelming response continuing, they knew it was time for a big change. By January 2005, they began looking for space to open a retail bakery. A short time later, they signed a lease for a storefront in Ormond Beach and the long awaited dream became a reality in November 2005.

Today, Paradise Cheesecakes offers over seventy-five different cheesecake flavors, in addition to a wide variety of assorted specialty bakery products, custom designed wedding cakes, cupcakes and cakes for all occasions. They owe their success to their attention to detail in everything they do and their world class customer service. 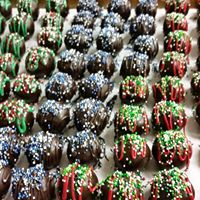