What began with a gym in a small office space that barely fit two tumble strips, a set of bars and a couple of beams has now grown into a 7,500-square-foot warehouse that now contains an inground foam pit and inground trampoline, a 30-foot tumble track and much more state-of-the-art equipment. Riptide Gymnastics and Cheer has made a great leap.

At the end of last year, Riptide moved into the warehouse across from its former location, now at 1203 N. U.S 1, and, after much renovating, it has turned the warehouse into a beach-themed, or riptide gymnastics, training facility.

“When I dream, I dream big,” coach Hollie Terry said, “but we are exceeding all of my dreams and goals. We are growing in leaps and bounds, and we don’t plan on stopping.” Riptide recently held an open gym that welcomed almost 100 kids, which has become the norm on

At the moment, Riptide competes in beginning-to-advanced tumbling, college and high school prep and competitive cheer.

Riptide Gymnastics and Cheer is hopeful it will enlarge its territory to 20,000 square feet to include a boy’s ninja parkour program.

For all who are interested in the competitive cheerleading program for ages 6-19, boys and girls, for the 2016 season can register all cheerleading levels at 10 a.m. Saturday, April 30, at its current location. Call 675-6765. 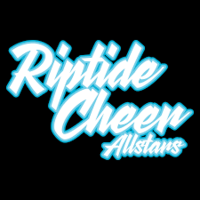